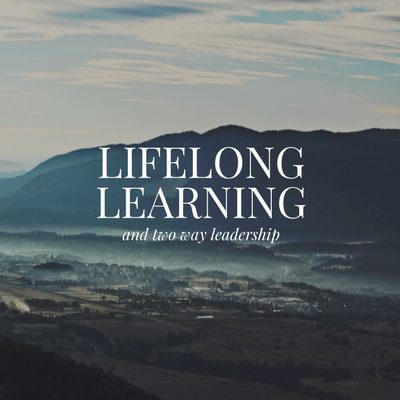 I was awful at playing football – talk to any of those poor people who have played against me. They found themselves displaying their exquisite skills against my inept hacking defending style that left most groundsmen champing at the bit to rush on with their forks to replace lumps of turf (and shin) that I had displaced with my scything swipes of the leg. The reality is I had never successfully played football at school. I’m not saying this for sympathy, I just wasn’t any good and the closest I ever got was to stand between the jumpers attempting (and failing) to save goals.

As someone invested in leadership and development, I’m a firm advocate in Life Long Learning and continue to carry an “L” plate around with me whenever I am delivering training in companies, with charities or in the public sector. My goal in life is about continuous improvement as I believe that although I could never possibly know all I wish to know I can, however, grow in my understanding and knowledge each day if I intentionally seek to.

So moving on a few years from school when I started employment to work with young people on the UK’s south coast, the group I worked with were football crazy. They were really good, and they were patient with me, so I decided I had to swallow my pride and ask them to teach me to play. Regularly a sponge ball, in various stages of disintegration, was used to test my limited skills and to see how well the building’s fittings were attached. In the case of the hall lights, it turned out, was not very well. However my footballing skills gradually improved from inept to just simply bad. Eventually I made a quantum leap moving from missing the ball every swipe of my leg to sometimes even managing to pass to the correct part of the pitch (near the radiator).

Learning is a two way process. I had been employed to develop leadership with young people and I knew that by having a reciprocal learning relationship with the group I would better earn the right to be able to help them learn and grow as young leaders. I learnt just as much from those young people as I helped facilitate their learning but I believe by showing a genuine interest in them our learning relationship had a firm foundation to build upon.

So after the intensive coaching some years later I felt that my football career reached its peak after I moved (or did I transfer?) to the City of Manchester. I was invited to play in a national eleven-a-side tournament, probably as most of the proper players had been injured. That day I scored a beautiful goal in front of my family that any striker would have considered a triumph – a run from the half way line beating the player from the opposing team to the ball and hoofing it right past the keeper into the roof of the net. The only problem was – I was defending that day and, after ruining the offside trap I had just scored the most glorious of own goals. My confused five-year-old son asked his mum; “Wasn’t Daddy supposed to use the other net?”

That day I thought I had it sorted and knew all I needed to, however I was found to come up very short and that remains my one official competitive goal. The day that we stop wanting to learn or allow our intentionality to wane is the day that we score an own goal. Being life long learners we continue to improve ourselves and those around us. In any organisation or company the biggest asset are the employees and the our effectiveness, morale and growth is dependant on continuing to be open and seek new learning opportunities. I also think that just as important though is that we seek to learn from those around us and listen to everyone we can. What can you learn today from a colleague, direct report or from the front line of service delivery?

I’ve also discovered that making mistakes is OK, as long as we learn from them and grow as a result. It doesn’t mean that we won’t make mistakes again but by working along the learning cycle and intentionally reflecting on our experiences we can implement new ways of doing things in our lives and how we work.

I recently delivered a lateral thinking workshop at a finance company in London based on the work of Edward de Bono who says, “If you don’t design the future, someone else will.”

Oh by the way, I now spend my time the other side of the touchline watching football with my son and friends. Instead I have decided that road cycling is by far the best sport for me to participate in but that’s another story…